Written by My Digital Accounts

The last year has been another year of interminable change for those looking after the tax affairs of temporary workers with many important changes announced; from Making Tax Digital for VAT being introduced, to IR35 mutating the temporary labour market and the more recent proposed changes for the domestic reverse charge for VAT….. here are some reflections and predictions:

Making Tax Digital (MTD) is a key part of the government’s plan to make it easier for taxpayers to get their tax right and keep on top of their affairs, moving tax information (and collection of taxes) online for all taxes. Most tax jurisdictions across the world are moving in this direction and APIs (enabling automatic links into government tax collection systems) are the way of the future!

Following the implementation of MTD for VAT, HMRC will remove access to the “basic tools” submission for VAT (over 90% of VAT returns used to be submitted in this way). Accountants and businesses therefore need to submit VAT returns directly from their chosen software from April 2019, for those above the VAT turnover threshold of £85,000.

More people will transfer over to bookkeeping packages but not as many as HMRC would have wanted when they first announced the legislation. This is largely because software companies have developed “Bridging software” as a cheap short-term solution. By April 2020 everyone will need to link their underlying transactions, however HMRC currently cannot see if a transaction has been linked which may make the process impossible to police.

For those over £85,000 turnover, VAT quarters ending 30th June 2019 (due 7th August) and after should be submitted to the government’s new “digital platform”. Whisper this quietly but there is anecdotal evidence that many have simply ignored the legislation and are submitting using the traditional “basic tools gateway”. Until the “basic tools” platform is switched off, many will continue to live in ignorant bliss of MTD for VAT!

The FCSA has a HMRC guest speaker from the internal MTD team speaking at our 19th September 2019 event to be held at Brabners offices in Manchester.

The Consultation Document (issued in May 2018) considers the effectiveness of the off-payroll working in the public-sector reforms introduced in April 2017 and, unsurprisingly, concludes that the new rules have been effective in reducing non-compliance.

Last year saw public sector workers move into direct employment role, following the rule change in April 2017 for a variety of reasons but mainly pressure from the end user, despite the fact that HMRC’s data shows that “the CEST tool delivers a self-employed outcome in ONLY 60% of cases”. The fear is that large companies in the private sector may take the same approach and following the introduction of the new rules in April 2019, there will be ‘blanket decisions’ whereby workers will be forced into false employment arrangements.

As many celebrities work on a freelance basis, IR35 has reached the headlines many times with BBC workers being pursued. HMRC’s aggressive (and apparently incorrect) interpretation has recently been highlighted by Lorraine Kelly’s success in a £1.2m case brought by HMRC claiming she was “inside IR35” when she clearly wasn’t. HMRC’s own CEST tool has been described as “not appropriate” by their own barrister in a tribunal case who also sought to argue that Mutuality of Obligation was effectively irrelevant – the tribunal had a different view and the taxpayer won the case – leaving HMRC to reflect on the learnings.

If you want to know more, this article is a wonderful summary:
https://www.linkedin.com/pulse/hmrc-omitted-moo-from-cest-tool-wrongly-assuming-all-nhs-dave-chaplin/

Many more cases will become public as contractors, end clients, recruitment agencies and more likely Accounting providers, gain more confidence to challenging HMRC due to the erroneous and aggressive interpretation of the rules (perhaps spurred on by an overly enthusiastic internal tax barrister).

The Off Payroll working rules will be extended to the private sector in the tax year beginning 6th April 2020. To be water-tight, you should have a record of your review attached to each contractor’s record which will probably mean using a software solution. Inevitably, End Clients will have to do a first review of which roles are clearly inside, which are clearly outside, and which are unclear before then moving on to individual assessments. 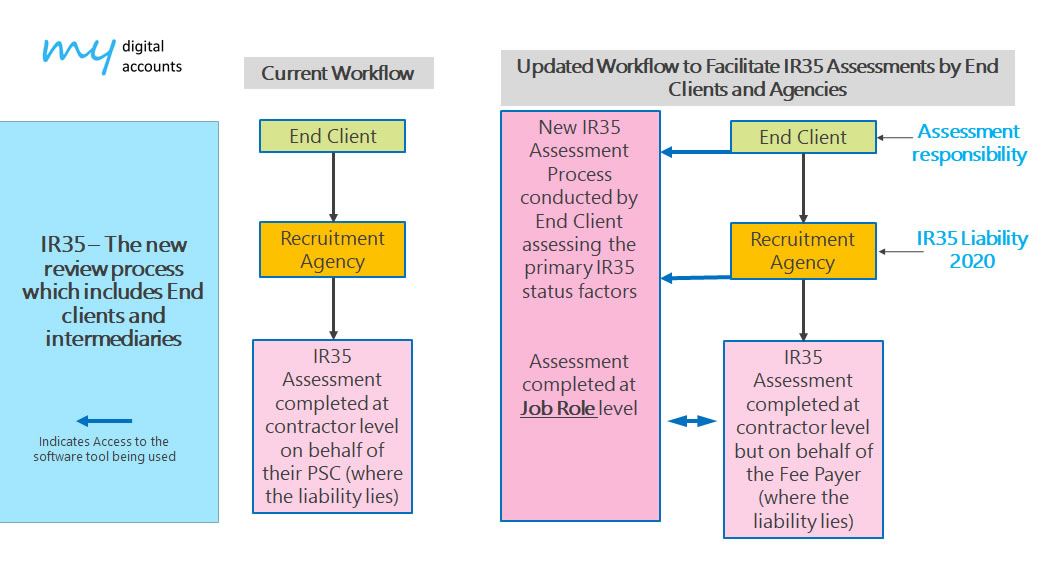 Take it from someone who has conducted several IR35 cases, your chances of success against HMRC are high if you have an appropriate audit trail of your IR35 review process.

Domestic reverse charge for VAT in the Construction Sector

Announced in March 2018, the new reverse charge for VAT will become mandatory in October 2019 for the construction industry, meaning the recipient not the supplier has to account for VAT charges.

In simple terms this means instead of the construction company declaring VAT to HMRC themselves, the person who pays them has to do it but also the construction company needs to declare that they haven’t received VAT and know that those paying them have paid it- confused? In simple terms, VAT is no longer passed down the supply chain and is paid to HMRC directly by the End User.

It has been confirmed by HMRC in their recently published guidance that that Employment Agencies who supply only labour will be OUTSIDE the scope of the reverse charge even if they fall within the scope of CIS! This is on the proviso that they clearly only supply workers and not construction services:

You should confirm with your customers that they agree that your supply of labour is NOT caught by the new rules and that your cashflow will be unaffected. If you may be affected, you should prepare for the changes in October, ensuring that your accounting systems adapt to reflect the new changes and that you forecast any cashflow implications as they could be considerable.

The FCSA has a HMRC guest speaker from the Reverse Charge for VAT team speaking at our 19th September 2019 event to be held at Brabners offices in Manchester.

Taxation rule changes are an inevitable part of the industry we operate in and we should be used to it by now. Beware of “advisers” who may give you advice AND give your customers advice as they may be conflicted. Take your counsel from a number of sources and form your own view. At the end of the day, there is always risk in such areas but an audit trail of your decision making will usually mean you avoid prosecution. Prosecutors are necessarily reluctant to take cases in areas where legislation is new or unclear- finally, risk is a part of your business model and if you don’t like risk – you are in the wrong industry!